When I started out on this adventure of making critters, I originally make a decision that I wasn't going to try to recreate people's pets, just the thought of trying to capture the personality that only the pet owner could see, was daunting.

But after seeing the photos of this unique cat, and listening to her owner I couldn't resist I had to try… First mistake grossly underestimating just how long I would eventually spend on this project, isn't that always the case 🙂 . 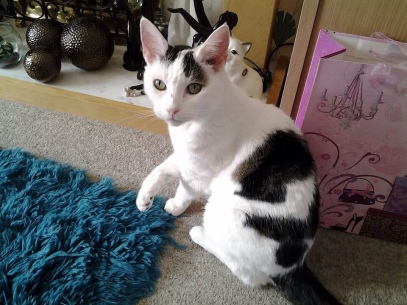 Willows owner, sent me as many photos as she could and I set to work, eyes were first, this proved to be tricky, the artwork you see on a computer screen and the final resin finished eyes was different so a bit of problem solving was in order… Ooh brain teaser. 🙂 trying to work out the right mix of colours taking into account the effect of the final process.

Next the armature, there is only so much punishment a wire frame can take, and it's getting the flexibility and strength working to its best, wire is always in danger of breaking if bent too much so I used a mix of twisted gauges ( I hope I have it right only time will tell.)

The base shape next, thankfully it's white, with the base fine work on ears and nose in a blended pink, it's so much easier to work in light colours.

So far so good, but the final details could make or break the project, plus the dreaded black had to be used.

Some areas needed to give the illusion of short fur, so this was a slow process trying to ensure that fibres were tangled enough to stay in place but not too much that it spoils the effect.

Well with lots of careful poking, prodding and stabbing. Willow slowly began to emerge, the hardest is deciding when you've done enough. I have spoilt many pieces by taking it too far. 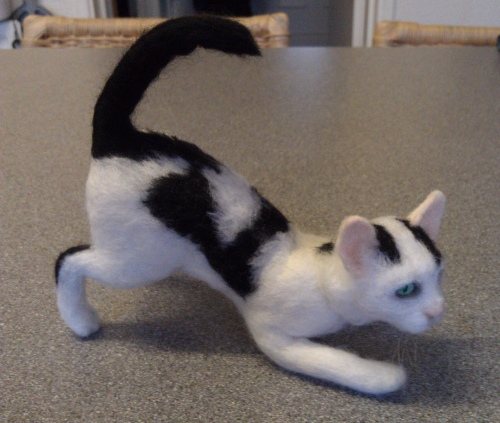 Well here she is, ready to go complete with her coat and whiskers 🙂

I'm I just have to finish off her traveling box ready for shipping out.

You know, sometimes it's so hard to let my critters go 😦 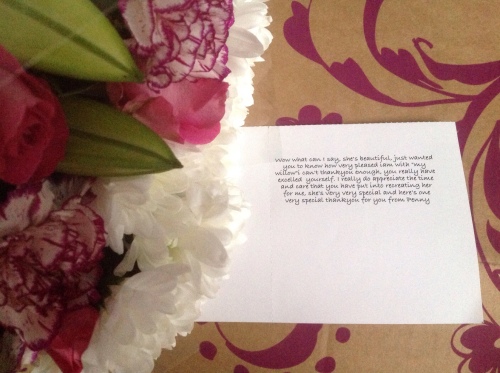 Just an update, I had a lovely, amazing surprise this morning, some beautiful flowers arrived from “Willows owner” and a thank you card. It's made my day:D

4 responses to “Recreating Willow a much loved cat.”